Somebody please give Hillary a valium!:  She’s coming apart at the seams making outlandish statement about how women’s health will be hurt if they have to spring for their own birth 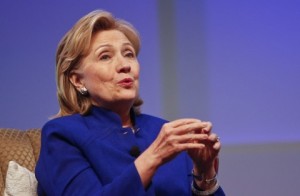 Clinton, a potential Democratic presidential candidate in 2016, said she hopes the court’s ruling: sparks a “real outcry” across the nation.

“This is a really bad, slippery slope,” Clinton said during an appearance at the Aspen Ideas Festival.

“It’s very troubling that a sales clerk at Hobby Lobby who needs contraception, which is pretty expensive, is not going to get that service through her employer’s health-care plan because her employer doesn’t: think she should be using contraception,” Clinton added.

This is the same woman who last week said The Bible was the biggest influence in her life. Of course that was a bunch of bull! That sales clerk can walk down the street a buy any contraception she wants for cheap. Nice try Hillary but nobody is buying what you got to say. Look at your books sales for proof!