Every person that gets shot in New York City can be blamed on Mayor Bill de Blasio and Opportunist Sharpton in addition to the shooters. It was Bill de Blasio who ran on a platform of ending stop and frisk and enough stupid New Yorkers fell for it. 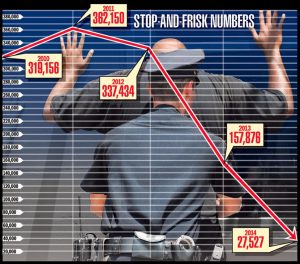 Shootings are up in the city because NYC thugs don’t have to worry anymore about packing their iron. I think the math is pretty simple.

NY Daily News[2] reports cops in two of the city’s toughest precincts recorded 99% fewer stop-and-frisks during the first half of the year – part of a staggering decline in the polarizing police tactic from the same period just three years ago.

Officers assigned to the 75th Precinct in East New York and the 73rd Precinct in Brownsville stopped just 126 people in the first half of 2014, compared to 10,540 stops between January and June of 2011.
The nearly eye-popping decrease is no misprint – and it comes as shootings in those neighborhoods are on the rise.

While Police Commissioner Bill Bratton has expressed his doubts, an NYPD Brooklyn North supervisor told the Daily News there was a definite link between the increase in shootings and the dramatic dive in the number of stops.

NYC is heading in a dangerous direction that might lead to becoming Chicago.