These seniors ain’t feeling the First Lady like dutiful young people should. Clearly, their not part of the Obama orbit replete with mindless Obots and Obama zombies. Somebody on Michelle’s staff dropped the ball and picked the wrong high school to do a commencement speech.

Daily Mail[1] reports if expanding the guest list to include Michelle Obama at graduation for high school students in the Kansas capital city means fewer seats for friends and family, some students and their parents would prefer the first 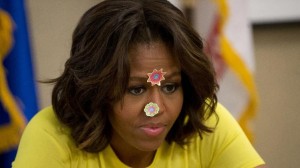 A furor over what the Topeka school district considers an honor has erupted after plans were announced for Obama to address a combined graduation ceremony for five area high schools next month an 8,000-seat arena. For some, it was the prospect of a tight limit on the number of seats allotted to each graduate.

For others, it was the notion that Obama’s speech, tied to the 60th anniversary of the U.S. Supreme Court’s decision in Brown v. Board of Education outlawing segregation in schools, would overshadow the student’s big day.

Democrats politicize everything! It’s the way they roll.