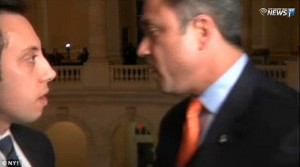 [1]The thugs come out at night in the halls of Congress!

This was Peter King’s partner in bashing Ted Cruz and real conservatives during the government shutdown last October.:  I’ll never forgive this bum for that and now I’m not really upset he’s caught in a jam.

Scotto then attempted to question Grimm about the federal investigation into his 2010 campaign fundraising, but the politician immediately cut the reporter off, refusing to answer any further questions.

If the reporter wanted he could have Grimm arrested for assault.