Portrait of Insane Progressive Parenting: ‘If Max wants to wear a pink tutu and fairy wings, he can’: Parents raise their son as a boy AND a girl so he won’t ‘grow up aggressive’ 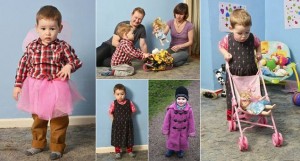 Dressed in a red checked lumberjack shirt and rust-coloured jeans, he shouted ‘beep beep!’ and giggled with delight while pushing a plastic motorbike around the living room of his family home.

Then, after lunch, a strange transformation occurred.

He swiftly grabbed a blonde-haired doll, sat her in a pink plastic pram, and took her on a short walk, stopping only when it was time to pretend to breastfeed her.

Later in the afternoon, the child collected several more dolls, found a selection of pink toy cups and saucers, and staged an impromptu tea party.

Max, who turns two later this month and lives in Walsall, is being raised according to a radical technique known as ‘gender-neutral parenting’.

It means Lisa and her husband, Martin, 34, encourage him to wear both boys’ and girls’ clothes, and to play with conventionally female — as well as male — toys.

Rather than being worried if he decides not to play football, and asks instead for someone to paint his fingernails with glittery polish,: they instead see it as a form of cute self-expression.

‘If Max wants to wear a pink tutu and fairy wings, then he can wear it,’ says Lisa. ‘He’s just expressing himself. I don’t want to put him in a certain box and treat him that way. I want to teach him to be whatever he wants to be. He can pick his own clothes and, as long as they’re warm enough for the winter, I’ll get him whatever he wants.’

I’d wager that the father of this boy is either a homosexual or the most chic-a-fied man on the planet.:  Either way, he’s exactly the kind of man Feminists want, docile, malleable, and easily dominated or specifically not a man art all.:  Don’t think:  that this warped idea of how to raise a child is limited to these nutcases.:  Progressives will eventually come around to insisting that every child should be raised this way.

: Originally posted at The Last Tradition[4]