Prominent Lib Blog, “Barack And Michelle Are All of Our Parents Now”…

Have you seen the ‘Your Mom Cares’ video on YouTube created to promote Obamacare? Seriously folks, Michelle and Barack Obama think they are our parents.[1] 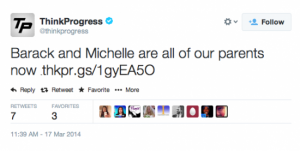 A group of famous people’s mothers – including the women who raised Jonah Hill, Jennifer Lopez, and Adam Levine – released a video for the the White House on Friday as part of the final push to get young people interested in signing up for Obamacare. The moms start off sharing details about those celebrities’ childhoods, and end up pointing out that young people shouldn’t skip out on health care because their moms would worry about them too much. “We nag you because we love you!” Michelle Obama says before directing viewers to HealthCare.gov.

“Nagging moms” are clearly a theme in the awareness campaign around health care. Last December, President Obama hosted a group of moms at the White House to emphasize the “unique role” they play in their kids’ decision to enroll in health insurance. “Blame Obama for Latest Round of Mom’s Nagging,” New York Magazine joked at the time.

But the concerns of parents have been part of the Obama brand since long before this final health care push. From racial issues to poverty to reproductive rights, the administration regularly uses the language of parenting as a tool to argue for policy. That strategy has been a defining one for Obama’s presidency, with both upsides and downsides: It puts a personal touch on his legislative positions, but can come across as a bit too patronizing. And, like practically everything related to our first black president’s time in the White House, it’s also a dynamic that’s not without racial implications.

Barack and Michelle Obama are parents to two adolescent girls, and they admit openly that their roles as a father and a mother shape much of the way they talk about their legislative priorities. In a society that typically doesn’t require male public figures to emphasize their relationship with their kids, it can be refreshing to observe the president in this context. “I see President Obama as uniquely forthright in how central fatherhood and his identity as a father are to his role as president,” MSNBC’s Melissa Harris-Perry pointed out in an interview with ThinkProgress last week. “Although all our presidents have been fathers, I’m not sure we have had another president in the modern era for whom this identity is so obviously central.”

This takes shape most clearly when Obama speaks about racial politics and his identity as an African-American dad (an area that, thanks to the persistent stereotype of the “absent black father,” is especially pressure-filled for Obama). When Trayvon Martin was shot and killed because George Zimmerman found his hoodie threatening, Obama famously said that if he had a son, he would look like Trayvon; that acknowledgment made the political into something intensely personal, and led to some of Obama’s most pointed comments about racial inequity during his entire time in office. That parental instinct is also behind the president’s “My Brother’s Keeper” initiative, a program seeking to improve young black men’s economic opportunities that Obama says was inspired by Trayvon. The new policy push is described explicitly in terms of familial bonds, with Obama positioned at the head of the household. When writing about the program, Salon’s Dr. Brittney Cooper described him as “donning the role of father-in-chief” for black people while introducing My Brother’s Keeper.

Barack and Michelle appear to be BIG believers in classical elite theory which is defined:

Or translated for us dumb folk:

Also,
Fake Hate Crime Caught on Tape by Police: British Teen Not Attacked for Being Gay, He Was Drunk and Tripped[3]