Have you ever wondered what happens to a baby that has been aborted? Since 1980 there have been 1,329,230,994 known abortions. That’s One billion three hundred plus million aborted babies in my lifetime. Can you imagine if the nearly 57 million babies aborted in the US since Roe V Wade were around working and contributing to society right now? So what does happen to these babies who have had their freedom stolen from them? A couple of popular choices are ‘down a flushing toilet’ like a goldfish or burned like holocaust victims. In some UK hospitals they have chosen to incinerate them with the garbage to heat their hospital.[1] 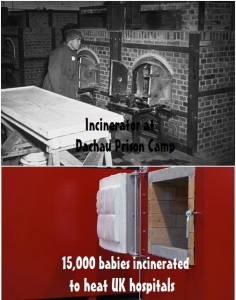 The remains of at least 15,500 aborted and miscarried babies were incinerated as clinical waste and even used to heat some hospitals in the United Kingdom, an investigation has revealed. The Department of Health on Sunday issued an instant ban after 10 National Health Service trusts admitted to burning fetal remains alongside garbage and two others used the remains in “waste-to-energy” programs, the U.K. Telegraph reported.

“Dispatches,” an investigative news program on the U.K. television station Channel 4, revealed that at least 15,500 fetal remains were incinerated by 27 NHS trusts over the last two years.

Addenbrooke’s Hospital in Cambridge incinerated 797 babies in its “waste to energy program,” while telling mothers the remains had been “cremated,” the Telegraph said. And Ipswich Hospital incinerated 1,101 fetal remains brought in from another hospital to generate energy between 2011 and 2013.

“This practice is totally unacceptable,” said Health Minister Dr. Dan Poulter. “While the vast majority of hospitals are acting in the appropriate way, that must be the case for all hospitals and the Human Tissue Authority has now been asked to ensure that it acts on this issue without delay.”

The NHS Medical Director, Sir Bruce Keogh, has written to all NHS trusts to tell them to immediately halt the practice. The Chief Medical Officer has also written to the Human Tissue Authority to review its policies, the Telegraph reported.

While I appreciate the Health Minister of the UK being indignant about the incineration of human bodies being burned for heat (kinda Soilent Green themed there), I wonder if Dr. Dan considers the actual bodies that he’s not fighting to save. The main goal of abortion is to control the population and race and keep it down, a nazi-istic ideal. Can you guess which race in the US performs most abortions? Black women: are more likely to perform an abortion than other non-Hispanic white women. The zero population zealots could care less about a “woman’s right” to abortion. Out of Al Gores mouth himself “Population growth is straining the Earth’s resources to the breaking point, and educating girls is the single most important factor in stabilizing that. That, plus helping women gain political and economic power and safeguarding their reproductive rights”. Oh hurrah for women to have such a dedicated supporter like Al Gore.