There are a lot of stories about exorcisms that quickly show themselves to be worthy of disbelief, mainly because of the lack of evidence or credible witnesses. : This story out of Indianapolis isn’t one of those[1]: 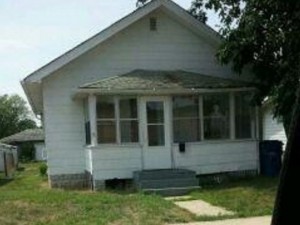 Here’s a photo the police took of the house. Oh, and it looks like something is standing in the front window.

A terrified mother claims she watched in horror as her demon-possessed 9-year-old son walked backwards up a wall and ceiling. Her claims would be easy to dismiss if a child services case worker and a nurse weren’t reportedly there to witness it all.

See what I mean.

And it wasn’t just those folks:

Further, Gary police Capt. Charles Austin told the Star that he is a “believer” after making several visits to the home and interviewing witnesses. He first thought the family was making stories up as part of a get-rich-quick scheme.

Ammons’ home was “exorcized” by a catholic priest in a number of ceremonies that were reportedly authorized by the Diocese of Gary. The story apparently became so believable that officers with the police department said they were too scared to stay at the house and some city officials wouldn’t even step foot on the property.

Later in 2012, child protective services in Indiana was contacted to investigate the mother for possible child abuse or mental illness. A psychiatrist reportedly evaluated Ammons and determined she was not mentally ill.

A family case manager reportedly interviewed the family and witnessed a number of strange occurrences. Valerie Washington confirmed that she witnessed the youngest boy growling before his eyes rolled back in his head.

Washington also claimed she saw the 9-year-old boy flash a “weird grin” and then walk backward up a wall to the ceiling. Her account was corroborated by a nurse.

“There’s no way he could’ve done that,” the nurse told the Star.