Fact: : hemorrhage is a leading cause of death on a battlefield. : Another fact: : the highest percentage of survivable battlefield deaths from 2001-2009 came from major trauma hemorrhage. : This simple invention[1] could change those facts: 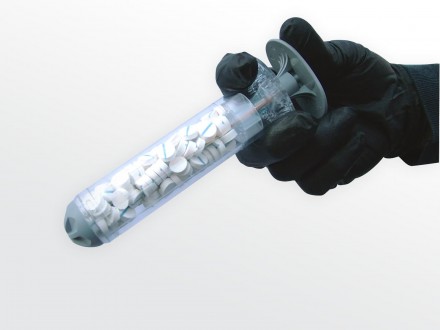 The new battlefield gadget is called: X-STAT[3], and it uses a novel twist on simple science, offering a different way to treat deep gun shot wounds that have plagued military medics for years.

The dime-sized expanding sponges — which are made from standard medical-grade sponges and covered with a hemostatic agent — are injected into the wound with the plastic tube and immediately expand to stop the bleeding. And because the sponges cling to moist surfaces, they can’t be pushed back out of the body by gushing blood.

“A significant number of wounds occur to regions of the torso where compression cannot be applied, such as the pelvis or shoulder … By working closely with the US Army Medical Research and Materiel Command and US Special Operations Command, we succeeded in developing a novel hemostatic dressing capable of stopping high-flow arterial bleeding within seconds without external compression.”

I wonder how many lives will be lost while we wait for the FDA to give the thumbs up.

See also: : Iowa Militarized Police: To Persecute and To Violate