Ralph Weens IV just wanted to eat at the Waffle House, but when he got in an argument with people who were angry over the Mike Brown shooting. While he left for the Huddle House, a crowd of 20 people followed him: 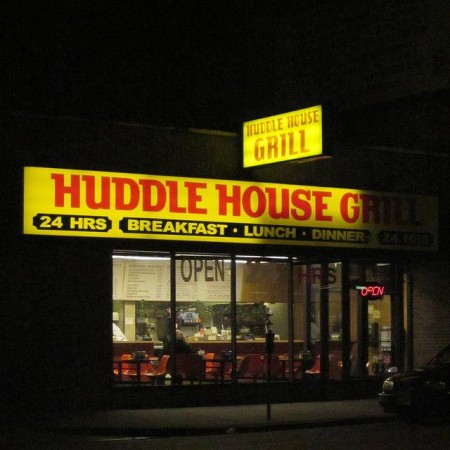 …David Knighten of West Point told AP earlier by phone that he and Weems had gone to a Waffle House early Saturday. He said a man waved him over outside the restaurant and told him politely that people were upset by the killing of 18-year-old Michael Brown in Ferguson, Missouri, and it wasn’t a safe place for whites. When he went in, he said, Weems was inside and was arguing with other men.

They left after an argument that brought police, Knighten said. He said he showed those officers his .45-caliber handgun and his concealed carry permit.

That was about 1 a.m., according to police, who did not give either man’s name in a press release posted by WCBI-TV (http://bit.ly/YRDPQj ).

On the way to Weems’ house, Knighten said, they went into a Huddle House restaurant with a nearly vacant parking lot.

However, he said, they apparently had been followed by more than 20 people.

Knighten, who said he had served with the Air Force in Afghanistan, said he came out of the restroom to find Weems surrounded. “I was trying to defuse the situation,” he said.

After some shoving, he said, the security guard told everyone to leave.

Knighten said some people blocked him from leaving with Weems. When he got out, he said, Weems was down and people were kicking him. Knighten said others attacked him, adding “I do remember racial slurs being yelled from the crowd.”

Knighten says he has broken bones in his face, a cut over his left eye and a blood clot in his right eye.

Police did not arrive until after the crowd had left, he said.

Police said they were called to the Huddle House about 2 a.m.

Gateway Pundit[2] reports Weens is still in a coma[3].