What if leaders of the US government started: saying that population growth was a danger to the environment? What: strategies would they use to stop or slow it? Government funded abortions, food suppression? This isn’t just conspiratorial thinking. Gore said at a recent global warming conference [1]that,: “Depressing the rate of child mortality, educating girls, empowering women and making fertility management ubiquitously available – so women can choose how many children and the spacing of children – is crucial to the future shape of human civilization,” 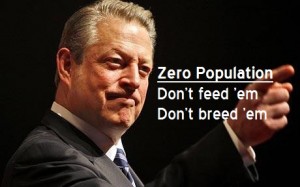 “Gore’s agenda for saving the world from global warming has always included population control,” Myron Ebell, director of global warming and international environmental policy at the free-market Competitive Enterprise Institute, told The Daily Caller News Foundation. “Advocating population control specifically for Africa is just another form of imperialism.:  Gore’s eco-imperialism is uncomfortably close to the original racist goals of Margaret Sanger, the founder of Planned Parenthood, who advocated population control in order to control the number of black and brown people in the world.”

The world is expected to have more than 9 billion people by 2075, with much of that growth coming from developing countries in Africa. This is alarming to environmental activists like Gore, who argues that “fertility management” is needed to address a whole slew of global development issues, including mitigating global warming.

“When Gore advocates ‘making fertility management ubiquitously available,’ does he mean that there should be free condom dispensers on every solar panel?” Ebell added.

Gore was on a panel at the World Economic Forum in Switzerland last week titled “Changing the Climate for Growth and Development.” The panel looked at global development through a “climate lens” and included other world leaders such as United Nations Secretary-General Ban Ki-Moon, Microsoft founder Bill Gates and Norwegian Prime Minister Erna Solberg.

I’m sure you’ve heard that you can fit the entire 7 billion population of the world at the same density level of New York City into the state of Texas. [3] That destroys the: idea that there are finite resources that will run out because of overpopulation. This lie is promulgated to lasso in people like a bunch of chattel to be controlled and ruled over. The world has millions of unused land mass filled with life giving resources. Americans need to get back to their roots of self reliance and independence.: People who garden understand that there are abundant resources for every person who turns themselves from a mere consumer to a producer. Fight Al Gore’s lie of global warming by planting your own victory garden and continue to be a conservative and wise steward of the powerful earth God created. Prove Gore wrong, save yourself some money in hard economic times, eat clean delicious food and best of all feel the satisfaction and security that if you put a seed in the ground and nurture it, there will always be abundance in your life.

Gore Warns Enthusiasts at UFO Conference: Global Warming Will Cause An “Alien Invasion”…[4]