Al Roker slams de Blasio for not closing schools as storm drops up to a foot of snow; Mayor hits back with icy response

Who does Al Roker think he is, Bill O’Reilly?:  This is a rare occasion I’m siding with Bill de Blasio for keeping he schools open.:  And it’s not because de Blasio needs my defense.:  It’s purely selfish on my part.:  I had to go to school in weather worse than this in the late 60s and early 70s.:  So these little crumb crunchers can do it too,: : : 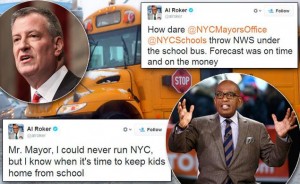 The NBC weatherman, who normally has a rather sunny disposition, traded icy barbs with Mayor de Blasio Thursday for Hizzoner’s handling of Thursday’s snow storm.

Roker, who also blasted Atlanta officials for their bungled response to last month’s winter storm that crippled the area, said his daughter was dismissed early from her school.

“Why are schools all around NYC closed? It’s going to take some kid or kids getting hurt before this goofball policy gets changed,” Roker tweeted.

Mayor de Blasio offered a frosty response to the popular weatherman’s tweets during a press briefing on the storm.

“I respect Al Roker a lot, watched him on TV for many many years,” de Blasio said. “It’s a different thing to run a city than to give weather on TV.”

He also said the city isn’t making major decisions based off of Roker’s “Today” show forecast.

“I respect all the meteorologists out there, but the one I respect the most is called the National Weather Service,” de Blasio said.