America, Land Of Opportunity — Even For Tiger People

America, Land Of Opportunity — Even For Tiger People: Where else but the United States could a nutjob like this guy[1] prosper? 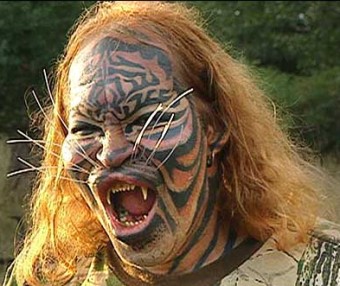 That isn’t face paint my friends, it’s the result of tattoos and surgical alterations. Here are the details…

“Dennis Smith is tattooed from head to toe with orange and black stripes and his teeth have been filed to needle point.

He has also had latex whiskers implanted and surgery to his lips so he has a permanent snarl. He now wants a surgeon to graft tiger fur on to his skin, like a perma-wig.

Mr Smith, who has changed his name by deed poll to Cat Man, said: “I have a collection of old tiger pelts from the days of hunting. I want these grafted on to me. It will cost another $100,000 but will be worth it.

“When I have the coat of a tiger, I feel I will have reached my goal in life.”

His fingernails have been crafted into sharp talons while his hands have tattooed markings like a tiger’s paws. He says he feels like a tiger.”

You may be wondering how this guy has managed to pay for all of this surgery. Well, this guy holds down a ” £80,000-a-year computer programming” job. If the currency conversion program I tried works, that comes out to around $128,000 dollars a year in US currency.

Now think about this…here we have a guy who’s trying to turn himself into a tiger via plastic surgery. But is he locked up in an insane asylum or has he had his brains blown out in a soccer stadium somewhere Taliban style? No, to the contrary, this guy has a cushy job. If this guy can make it in the US, anybody can.