Had this weird dream last night I was visiting one person I knew, and from their house I had to make a quick phone call to another, about some matter completely unrelated. And they both ended up engaging in pointless, off-topic, cyclical anti-Bush screeds. Here I was getting it at the same time from two directions, and I didn’t care one way or the other. 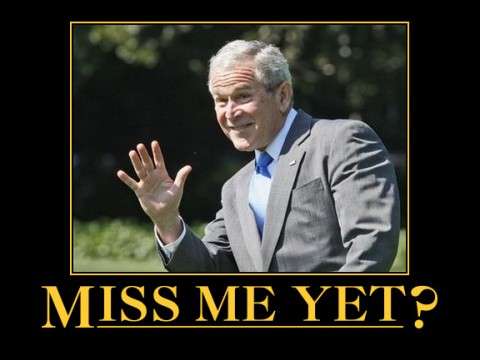 Perhaps this dream was inspired by the endless hubbub about “Republicans lost the election because…” from which one melodious refrain has emerged, sung to the tune of “…they didn’t adequately distinguish their policies from George W. Bush.” Now, I’m not in the Bush-hating crowd, although like many others who are not, I cannot say I agreed with everything he did. Among the complaints I’ve had about him in fact, just speaking for myself, is a complaint shared by those who’d like to turn him into a pinata and whack him with a bat. Many litanies have been strung together and then repeated endlessly, with rhythm, as if six to eight words were really just one. Listening to them and pondering them, one sees they all come back to a central salient point that George W. Bush has “friends,” and some of his policies seem to be cobbled together to service the financial interests of those friends as a primary purpose, without regard to, or to the detriment of, the country as a whole. There may or may not be truth to this, but it does find some sympathy with me. It’s true of the too-big-to-fail thing, if nothing else.

As far as a reason to single out one politician away from the rest for special criticism, however, it makes no sense at all. In fact, it’s just dumb. This is practically the definition of “politician” is it not? I’m not pushing for the bar to be lowered, that would be a dreadful thing, all I’m pointing out is that things are the way they are. Our politicians have friends and they tend to do friendly things for those friends while the rest of us go “Wha??” George W. Bush wasn’t the first and he hasn’t been the last.

Over the years I have noticed something about Bush Derangement Syndrome sufferers: They have shown a persistent tendency to think about things in binary terms. Something can be good, or if it is not, then it is bad. A person can be in, and if he is not, then he must be out. If some course of action has their approval, then they seem to lose track of the reason why; there is no risk involved in engaging it, no side effects to be anticipated, no liabilities involved in choosing it. From all I have been able to observe about them, they are living out their entire lives in the fallacy of the excluded middle[1]. And this strikes me as strange since, thinking back to 2004, hey wasn’t that one of the biggest complaints they had about the man himself? Lack of “nuanced” thinking or some such? Eight years on, I never hear that word “nuance.” I mean, I knew at the time it was a campaign slogan, I just kind of figured there might be more to it than that. Guess I thought wrong, because the Bush haters are showing us lack-of-nuance better than anybody else I’ve seen… 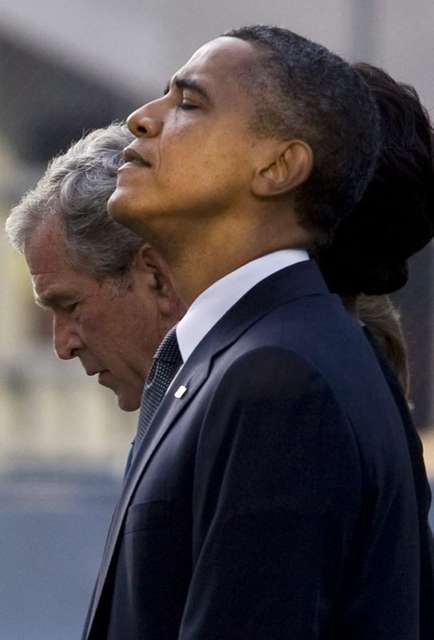 But anyway, I’m not sure Mitt Romney had a problem failing to differentiate himself from George W. Bush. Maybe that’s a race thing? Bush and Romney are Republicans, white, male, rich…beyond that, what do they have in common. I recall a popular Bush-hating theme going around that said Bush had been associated with a lot of business failure or something? Romney didn’t have that going on.

A lot of the people who are most unhappy with Bush, seem to get a thrill out of being unhappy with things in general. Have we ever pondered what it would take to make them happy? Since they’re binary thinkers and they are currently in a frame of mind in which “bad” is essentially defined as resembling George W. Bush, I imagine the thing that would really get their all-in would be something that is the polar opposite of George W. Bush. Barack Obama gives that a good start with the darker skin and the non-swagger walk-jog thing, and the Il Duce Easter Island unnatural head angle…

Obama’s position on gay marriage is opposite as well, but of course that was not always so.

They both have dirty hands with the bank bailout boondoggle, so this anti-Bush guy would have been opposed to it.

Let the embryonic stem cell research churn away, let Saddam Hussein built up a big arsenal of weapons, possibly provide a safe haven for terrorists…maybe not, but definitely allow Hussein to do, like, whatever man. Until there’s another attack in New York, or Miami, or Los Angeles, or Chicago. His critics might say he could have prevented the attack by going after the terrorists’ support network…and he’d say “Yeah but Saddam Hussein never directly attacked us,” which I’m sure would be comforting to the people who once lived where nothing remains but a deep smoking crater.

The anti-Bush would veto some bills sent from Congress for spending, insisting on some items being cut. Okay, yeah, that part I like.

Since Barack Obama would complain about inheriting a mess no matter what, go ahead and let the credit rating fall; that would be the opposite of the George W. Bush we knew. Also, unemployment rate under this opposite-of-Bush would be somewhere around nineteen percent, maybe higher than that. With gas somewhere around eight fifty a gallon I figure.

No, I’m not talking about cause and effect here, I’m just trying to define the opposite of Bush.

He’d certainly be an atheist. He’d still be drinking, I suppose.

He’d cut humanitarian aid to Africa. Medicare benefits too. The Fannie Mae and Freddie Mac thing, the anti-Bush wouldn’t have done anything to try to warn Congress, he would have just let it happen. Same end results, I suppose, although possibly a bit quicker. And worse.

I’m not sure of the message that would be sent if a band of terrorists flew our own passenger jets into our buildings, and President Not Bush refused to take any action in response to this. That’s an interesting alternative-universe historical question to ponder. Maybe with the Benghazi thing happening on the eleventh anniversary, we’re about to find out.

The anti-Bush would raise taxes across the board. He’d raise the estate taxes and the marriage tax.

His two daughters would be butt ugly.

He’d appoint the opposite of Sam Alito and the opposite of John Roberts to the Supreme Court. I’m not sure how the opposite of Chief Justice Roberts would have ruled on ObamaCare. Let’s see…in this universe, it would be unconstitutional if it was a penalty, but it’s constitutional if it’s a tax…so in that one…???? There’s a problem in my mental exercise here, because Roberts’ opinion doesn’t fit in a binary brain. Let’s just say the anti-Bush nominates Ernie and Bert from Sesame Street to the Supreme Court and leave it at that.

His smile would be perfectly straight.

He would cut NASA’s budget.

He would support the Kyoto Protocol. I suppose that means He’d try to get the Senate to vote on it again.

He would oppose capital punishment but support euthanasia.

And with that in mind, the bit-brains can think on it and figure out which one they’d like better. All in all, although the results are mixed for me, I’m happier with the one we had.

Cross-posted at House of Eratosthenes[3] and Brutally Honest[4].