Nothing opens your eyes like someone driving off with your property:[1] 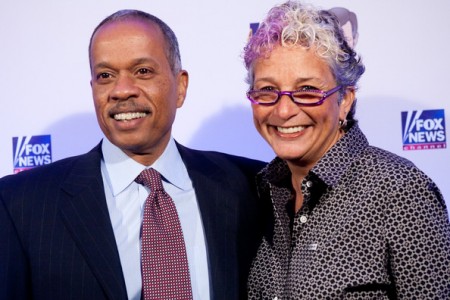 Fox News contributor Juan Williams, who recently declared that America should be “gun-free,” has revealed that after his wife was recently robbed of her car she said, “I wish I had a gun.” Williams told “The Lars Larson Show” on Monday that the robbery occurred when his wife, Delise, “went to the gas station” to fill up her car, according to Breitbart.com. “While she’s trying to put the credit card in, some guy rushes by her, gets in the car and drives off with the damn car,” Williams said, adding that his wife then said, “I wish I had a gun.” Larson, who hosts the conservative radio talk show, reacted by saying, “God bless Mrs. Juan Williams,” and added that her husband should buy her a gun “at the next opportunity.”

Juan said he thought America needed to be a gun-free zone.

See also: : Virginia Democrat to Supporters: Harass Tea Party Members by Calling the Police on Them