Democrats say that requiring ID to vote is racist and could suppress thousands of blacks from voting. Voter fraud is rampant and destroying the ballot box with tens of thousands of bogus voters popping up in every state.[1] 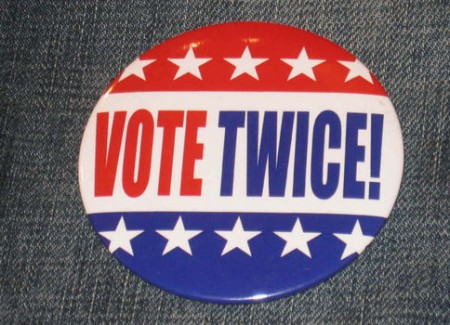 RICHMOND, Va. — A crosscheck of voter rolls in Virginia and Maryland turned up 44,000 people registered in both states, a vote-integrity group reported Wednesday. And that’s just the beginning.

“The Virginia Voters Alliance is investigating how to identify voters who are registered and vote in Virginia but live in the states that surround us,” Alliance President Reagan George told the State Board of Elections.

George acknowledged that the number of voters who actually cast multiple ballots is relatively small. In the case of Maryland and Virginia, he revealed that 164 people voted in both states during the 2012 election. But George said his group will expand their search for duplicate voters in the District of Columbia, Pennsylvania, New York, New Jersey, Delaware, North Carolina, Tennessee, West Virginia and Georgia.

“We are also determining the best way to identify non-citizens who have registered to vote and may have voted in past elections,” George said. Working with the Privileges and Elections committees of the state House and Senate, VVA identified 31,000 dead voters via the Social Security Administration’s Death Master File. Subsequent processing by SBE found 40,000 to 60,000 dead voter registrations.

Check the 50,000-plus patient beds in Virginia nursing homes and rehab centers amid reports of voting irregularities there.

Require proof of citizenship to register to vote. Kansas and Arizona require this.

Annually audit felons who are not allowed to vote.

“Certain nonviolent felons, especially those who commit voter fraud, should never be given back their right to vote,” George said.

The disenfranchised voters are those who responsibly vet their candidates and are mature enough to obtain an ID to vote. Mention this to any Democrat and they will call you a racist to shut you up.