Australia wises up an elects conservative leaders in Tony Abbott landslide, kicks progressive leader to the curb after ruining the country

U.S, voters need to realize that electing progressive leadership leads to the city of Detroit bankruptcy[1], little boys allowed to use the girls’ bathroom[2] in California, and a failing U.S. economy for the past five years.:

It’s not a coincidence that when cities, states and countries elect progressive, despair, chaos, and destruction follows.: : : 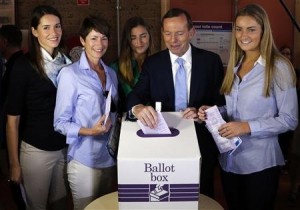 “Abbott, 55, built up a strong opinion poll lead on the back of promises to rein in government spending, scrap an unpopular tax on carbon emissions, and stop the flow of refugee boats arriving in Australia’s northwest.”

Yahoo News[4] reports Australia’s conservative leader Tony Abbott swept into office in national elections on Saturday as voters punished the outgoing Labor government for six years of turbulent rule and for failing to maximize the benefits of a now fading mining boom.

“From today I declare that Australia is under new management and Australia is once more open for business,” Abbott told jubilant supporters in Sydney.

It was frustration with Labor’s leadership turmoil that cost the government dearly at the polls.

Labor dumped Prime Minister Kevin Rudd in 2010, for Australia’s first female prime minister Julia Gillard, only to reinstate Rudd as leader in June 2013 in a desperate bid to stay in power.

“It is the people of Australia to determine the government and the prime minister of this country and you will punish anyone who takes you for granted,” said Abbott.

Rudd was given a rousing welcome from dejected Labor party supporters in his hometown of Brisbane, conceding defeat and announcing he would step down as party leader.

“I know that Labor hearts are heavy across the nation tonight. I gave it my all. But it was not enough to win,” Rudd said, supported by his wife and family.

Labor’s overall vote was its worst since 2004, when then conservative prime minister John Howard won his fourth and final term, but was not as bad as the party had feared. Labor held on to all of its close seats in Rudd’s home state of Queensland, and held onto several marginal seats in western Sydney.

Election officials said with about 80 percent of the vote counted, Abbott’s Liberal-National Party coalition had won around 52.6 percent of the national vote, and projected it would win at least 88 seats in the 150-seat parliament.

Abbott could end up with a majority of around 30 seats, ending the country’s first minority government since World War Two. Labor had relied upon independent and Greens support for the past three years.

This was an election that was lost by the government more than one that was won by the opposition,” former Labor prime minister Bob Hawke told Sky News.

The election was been pitched as a choice on who is best to lead the A$1.5 trillion ($1.4 trillion) economy as it adjusts to an end to a prolonged mining investment boom, fuelled by China’s demand for its abundant natural resources.

Abbott, 55, built up a strong opinion poll lead on the back of promises to rein in government spending, scrap an unpopular tax on carbon emissions, and stop the flow of refugee boats arriving in Australia’s northwest.

His campaign had support from media magnate Rupert Murdoch and his Australian newspapers, which have urged voters to reject Rudd’s Labor government. Australia’s other major newspaper group Fairfax also called for a change of government, saying

Rudd had painted Abbott’s planned spending cuts as dangerous European-style austerity and said his government was best placed to manage an economy that is slowing but remains the envy of much of the developed world.

Progressives do not lead, they destroy!

Originally published at The Last Tradition [6]