Do you think the local schools and parents should have the right to decide what’s best for their kids? Michelle Obama has NEVER met your child and yet she is unilaterally stealing personal choice from families across the nation with her new school lunch rules, or risk losing school funding.[1] 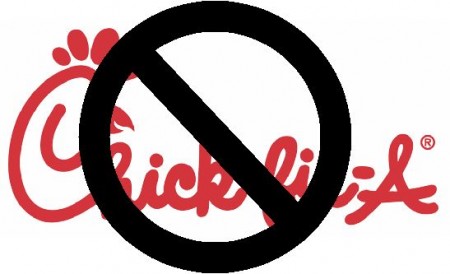 Myrtle Beach, SC- Students at Socastee High School are accustomed to buying Chick-fil-A sandwiches at school during their break, but the practice will stop in the fall due to the latest round of federal nutrition guidelines aimed at instilling healthy habits in students.

The Smart Snacks in School nutrition program, required by the Healthy, Hunger-Free Kids Act of 2010, took effect July 1 and places more restrictions on snack foods and beverages sold to students during the school day. The new standards are expected to change some vending machine choices and specialty meal offerings for students, as well as goodies eaten at class celebrations and items sold for school fundraisers.

Some of the new regulations require snack items to have 200 calories or less. Sodium must be equal to or less than 230 milligrams, although that number will drop to 200 milligrams in 2016.

Socastee High students who liked their Chick-fil-A chicken sandwiches will be out of luck in the fall, as a regular sandwich contains 440 calories and 1,390 milligrams of sodium, according to the company’s website. The sandwich loss also will affect the school’s special education students, whose field trips were funded by the sales.

“They don’t meet the standards – we’re struggling with it,” said Socastee Principal Paul Browning. “The Chick-fil-A profits went directly to the field trips. We’ve got to raise some money, but we will figure something out.”

Michelle Obama has the same opinion as all tyrants have since time began… They are smarter than everybody else and YOU and your local school are too dumb to make smart choices for your kids. Free choice only applies to whomever the First Lady decides to grant that right to I guess.

Also see,
Obama Voters Say You Have to Pay Their Way[3]