Yet another “real world” example of Hillary Clinton’s incompetence as secretary of State. So besides failing to provide adequate security for our consulate in Benghazi that resulted in four American deaths, Hillary can’t recognize dangerous people when she made aware of it. 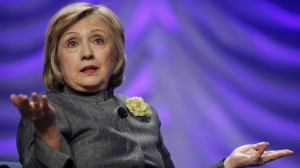 [2]including that of former Secretary of State Hillary Clinton.
“Abominable,” is how she described the kidnapping, calling it an “act of terrorism” that merits “the fullest response possible.”
But the State Department, under Clinton’s leadership, repeatedly resisted and blocked efforts to designate Boko Haram as a terrorist group. Those who pushed for the designation as early as 2011 are now saying the department missed a major opportunity to track and target the deadly organization as it grew.
“The delayed designation of Boko Haram as a Foreign Terrorist Organization cost us two years of increased scrutiny of the group’s activities and leadership,” Rep. Patrick Meehan, R-Pa., said Thursday in a statement to FoxNews.com. “Boko Haram met the statutory requirements for the designation as early as 2011, but the State Department’s delay has left us with fewer resources and less intelligence on an Islamic terrorist group with ties to al-Qaeda that is clearly destabilizing the region.”
More here[3]

Bad job, Hillary! Stick to making cookies for Bill if you can manage not burning them.