Bill Clinton On Obama: “Voters are turning on him like a bad dog, and we have to do the same.”

What Liberals won’t do to win? Clinton’s say they will turn on Obama because he’s become a pariah to the voter.[1] 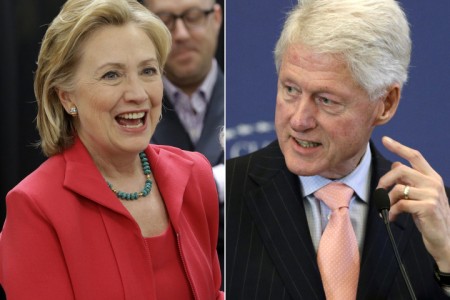 More from Ed Klein’s book. How craven for power can you be? This takes a serious dip into creepy-ville…

Later that day, Bill, Hillary, and two of her friends gathered in the converted red barn that served as Bill’s home office. The women drank Chardonnay; Bill favored a Pinot Noir.

It wasn’t long before Bill brought the conversation around to politics.

“We started too damn late last time,” he said, referring to the 2008 campaign. “That’s why I’ve been working on this thing for the past five years, since that one ended. We’re on course to raise the money, well over a billion dollars, and we’re getting our people in place everywhere.”

He said that he was writing what he called “playbooks” – thick notebooks outlining positions for Hillary to take on the major issues of the day – everything from immigration reform to gun control and education.

He felt strongly that Hillary was going to have to distance herself from Barack Obama and his amateurish handling of domestic and foreign policy.

“You’ve got to hit hard at the Obama record,” he continued, getting up from his chair and circling the barn while he spoke. “Your administration would be a third Clinton term, not a third Obama term. We have to be very harsh, because the voters are turning on him like a bad dog, and we have to do the same.”

The conversation continued in that vein for some time, and then, quite unexpectedly, Bill changed the subject and began talking about his health.

“I’m worried how my health will affect your campaign,” he said. “I have to do all I can to prepare the campaign playbooks, but I also have to accept the fact that if I fall by the wayside, you have to continue without me and make a positive thing out of it.”

Clinton then goes on to suggest Hillary wear black because ‘The images on television of the :­funeral and the grieving widow in black will be priceless. So you’ll have to take maximum advantage of my death. It should be worth a couple of million votes’. If Bill Clinton is willing to turn on Obama and die just so his wife can win the next Presidential election and continue the legacy of liberalism… what are you willing to do to ensure your candidate does win? Remember this little conversation we had when you’re sitting in your living room procrastinating getting involved, neglecting walking your precinct or not donating money to the MOST conservative candidate who represents your ideals.

The Worst Of Barack Obama In Quotes (87 Quotes)[5]