Bill de Blasio used to work for the worst mayor of New York, David Dinkins, who presided over the city’s worst murder rate of 2,600 per year.:

Bill de Blasio has promised to end MYPD’s Stop and Frisk policies.:  However, he very well may be saying that to garner votes from the minority community all the while knowing he has no intentions of dismantling Stop and Frisk to avoid a crime spike on his watch.: 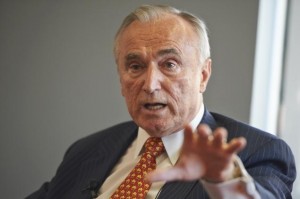 at 1 Police Plaza if Bill de Blasio is elected mayor.

As a new poll showed him with an astounding 50-point lead, de Blasio on Thursday revealed that Bratton is on his list of potential candidates to be the city’s next top cop.

“One person who’s been a very key adviser to me is Bill Bratton. I will certainly consider him,” de Blasio said in an interview on WCBS-AM.

Think of Barack Obama who railed against George W. Bush defense policies only to double down on them after he became president.:  They say what the people wanna hear to get elected.:  After they win, they want to keep things as safe as they were to avoid getting blame.: