You can bet Dante de Blasio goes to the best schools New York City has to offer.:  His father, Bill, the Democrat candidate for mayor wouldn’t have it any other way,:

However, when it comes to poor Black and Latino kids Bill de Blasio say “nay” for better performing Charter schools for them.:  He likes for them to stay locked in failing schools because that’s where unionized teachers work and they are giving him money for his campaign.:

So, poor minority children are left without hope because union teacher’s dues that are being funneled to de Blasio coffers are all that’s important.:

New York Pos[1]t reports Bill: de Blasio’s campaign theme is a “Tale of Two Cities.” Yet his pronouncements suggest that, as mayor, he’d create his own tale of two cities: one for families who made the same choice as he did for his child, a district-run public school, whom he’ll support; and another, for families who made a different choice, charter schools, whom he’ll undermine. 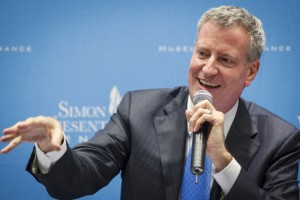 [2]De Blasio boasts of being a public-school parent but the specialized high school his son attends isn’t just any public school: It has 99.6 percent rating in college readiness with 96 percent of its students graduating in four years, 95 percent going on to college and 88 percent receiving an Advanced Designation Regents Diploma.

I went to a specialized NYC public high school myself and support them – but let’s be honest, most parents don’t have a public-school option that’s as good as what de Blasio had access to for his son.

Fewer than a third of New York City public-school students passed the state English Language Arts exam this year. Shockingly, there are more than 50 city schools where not a single African American student passed this year’s state math tests.

That’s why many families opt for charter schools. But charters get less funding than traditional public schools – $2,000 less per student, according to the Independent Budget Office. The disparity is even greater for charters serving needy students.

The problem is that charter schools get no facilities funding, just operating money. That’s why Mayor Bloomberg lets charters use excess public-school space for free.

But de Blasio wants to charge charter schools rent. Even though they are public schools by law. Even though they get no facilities funding. The rent will therefore come out of each school’s operating budget, which is supposed to pay for things like teacher salaries and instructional materials.