Boston, MA- Firearm Rule Is So Intrusive It Restricts Self-Defense Even When It’s Not a Gun

A couple months ago I was mugged at knifepoint. I was stupid for being unprepared for such an event and luckily made it out safely. Like a Boyscout I am now always prepared. But what if your state doesn’t allow you to prepare yourself for defense? Massachusetts makes is difficult for citizens to arm themselves with even pepper spray.[1] 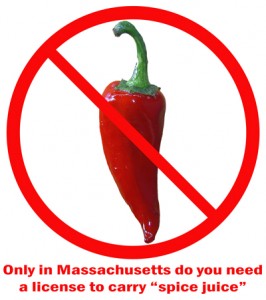 It’s probably not wholly surprising that Massachusetts, one of the bluest states in the country, has some of the strictest gun control laws in the nation. But what might come as a surprise is that the Bay State also strictly controls sales of pepper spray and mace.

Currently, a Massachusetts resident looking to buy pepper spray or mace must have a state-issued firearms identification card, the same as someone who is buying a gun. Massachusetts is the only state in the country that imposes the firearms ID card restriction for the non-lethal, eye burning defense sprays, according to the Gun Owners Action League, an NRA affiliate in Massachusetts.

Democratic state Rep. Colleen Garry sponsored one of the bills, recalling a personal experience she had, the Fitchburg, Mass., Sentinel & Enterprise reported. She got a license, but didn’t think it’s necessary.

“I had a situation in my own life that I thought my family members were at risk,” she said. “I did not want to get a gun, but I wanted to be able to protect them.”

The newspaper reported that the string of bills comes amid other efforts to strengthen background checks for guns. Another bill in the legislature, filed by Republican state Rep. Kimberly Ferguson has more than two dozen co-sponsors. Thus far, there hasn’t been much vocal opposition to lifting the restrictions. However, according to the Gun Owners Action League, such legislation was introduced last year and the legislature continues to “drag their feet on legalizing pepper spray” this year.

The Massachusetts Chiefs of Police Association backs the idea of making mace and pepper spray easier to obtain.

The Second Amendment clearly states that citizens have a right to bear arms and that right should never be limited in any way. If a person chooses to walk around with pepper spray, it is their right to do so without informing anyone or filling out paperwork. Personally, I would opt for something that has more assurances of a favorable outcome for me like my Springfield XD.