Because of the immorality of our society and the unwillingness of so many Christian churches to speak up for their values today, the Boy Scouts were put in a very difficult position. They didn’t want gay scouts in the organization, but they were losing a lot of corporate sponsors. So, they decided to split the baby in half. 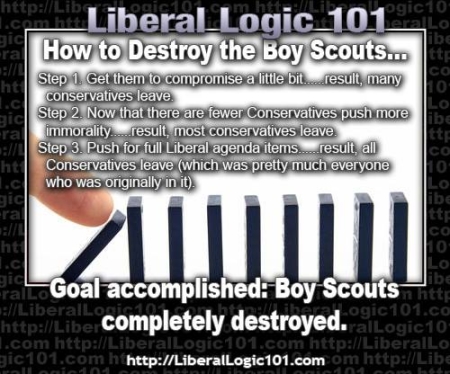 The hope is that by allowing in gay scouts, they’ll be able pick up some of the sponsors they’ve lost without losing the support of the religious groups that make up the backbone of their organization.

Unfortunately for the Boy Scouts, their attempt to make the best of a bad situation may not be working out as planned[2].

Among the denominations that may cut off support for the Scouts is the Southern Baptist Convention (SBC).

Church leaders, according to CNN, are planning to urge the religious order’s 45,000 congregations and 16 million members to officially cut ties with the Boy Scouts. Considering that 4,000 units are currently sponsored by the SBC, this would be a monumental loss for the organization – one that would impact 100,000 young men who participate through this denomination.

This month, the SBC plans to vote on a non-binding resolution at a convention in Houston. The effort will take place on June 11 or 12. And the provision, according to insiders, has a good chance of passing.

The SBC has emphasized that even if a resolution is voted upon, that it is up to local affiliates to make decisions about scouting. That said, if Land is correct, the mere non-binding proclamation would have a major impact on the SBC and the Boy Scouts – and it would surely change the relationship between the two parties.

Pastor Tim Reed of First Baptist Church is among those who believe the Scouts should have never changed their rules.

Conceivably, this could be just a bump in the road for the Boy Scouts, but it seems just as likely that it’s the beginning of an unstoppable downward cycle.

Liberals and gay kids are NEVER going to join the Boy Scouts en masse. Yet, the further the Scouts go to accommodate them, the more they’re going to turn off their largely conservative religious membership.

The next step will be court challenges demanding that the Boy Scouts allow gay Scoutmasters. Now, they can no longer claim to have a moral objection to it and that may very well undermine the central rationale of the Boy Scouts of America v. Dale Supreme Court case that allowed them to keep gays out of Scouts in the first place.

Of course, parents are already more than a little bit cautious about groups like the Boy Scouts because of fears that pedophiles might slip into the organization to have access to young boys. Well, the moment you start having gay men going out in the woods with teenage boys they may be attracted to, almost the entire membership of the organization will bolt en masse and the Boy Scouts will be destroyed. Since there is overwhelming hostility towards Christian organizations in the liberal gay community, that would be considered a great outcome. It wouldn’t be so great for Christians, parents or people whose first priority is the children, but as always, those concerns are just shrugged off by the Left.

Hopefully, it won’t come to that, but if the Boy Scouts are a pale imitation of the organization they are today in a decade, you’ll be able to pinpoint the exact moment the organization started to die.