Christian minorities are being killed in many Muslim countries around the world because of their faith and the United Nations and President Obama says nothing about it.:

NY Times reports[1] a suicide attack on a historic Christian church in northwestern Pakistan killed at least 75 people on Sunday, in one of the deadliest attacks on the Christian minority in Pakistan for years. 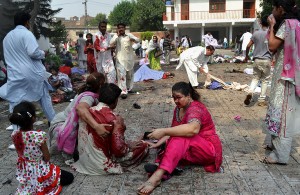 [2]The attack occurred as worshipers left the All Saints Church in the old quarter of the regional capital, Peshawar, following a service on Sunday morning. Up to 600 worshipers had attended the service, and were leaving for a distribution of free food on the lawn outside, when two explosions ripped through the crowd.

Dozens of people were killed and more than 100 wounded, said Akhtar Ali Shah, the home secretary of Khyber Pakhtunkhwa province.

The death toll continued to rise as rescue workers sifted through the damaged church property, said Hamid Ullah, a rescue worker with Al Khidmat Foundation, a rescue service operated by the Jamaat-e-Islami political party, said his team has recovered 75 bodies and put them in the coffins.

The dead included women, children and two Muslim police officers who had been posted outside the church. Witness reported scenes of mayhem as rescue workers ferried victims from the church, which witnesses said was scattered with body parts, shrapnel and bloodied clothing.

Enraged Christians reacted emotionally as police and rescue workers reached the scene, forcing some to leave.

“As soon as the service finished and the food was being distributed, all of a sudden we heard one explosion, followed by another,” said Azim Ghori, a witness.

Police said it was not clear whether the attack was the work of a lone attacker or two suicide bombers. Muhammad Ilyas, a senior officer in Peshawar, said it was “more likely” that a lone suicide bomber had first thrown a hand grenade before detonating his vest.

President Obama often is fast to point out that the U.S. is not at war with Islam.:  But, in reality Islam is at war with Christianity and political correctness keeps the world silent about it.: :