Should there be limits put on free speech? What kind of limits would you put? In Great Britain a Baptist Church was told by police to take down a sign suggesting non-believers were going to hell[1]. 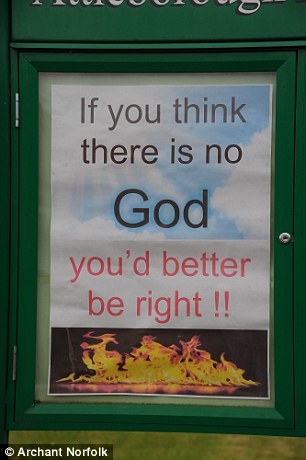 A pastor at Attleborough Baptist Church in Norfolk, was spoken to by police after this poster appeared on the church’s notice board. (Daily Mail)

So, if the kid wasn’t Christian… Why would he be afraid of hell?
The Daily Mail reported:

A baptist church was at the centre of a police probe after a sign which suggested non-Christians would ‘burn in hell’ was investigated as a ‘hate incident’.

The offending sign at Attleborough Baptist Church in Norfolk, pictured burning flames below words which read: ‘If you think there is no God you better be right!!’.

Now the church has been forced to remove the sign after a passer-by complained to police that it could ‘not be further’ from the Christian phrase, love thy neighbour.

Robert Gladwin, 20, said: ‘It is my basic understanding that Christianity is inclusive and loving in nature.

‘The message being displayed outside of the church could not be further from the often uttered phrase ‘love thy neighbour’.’

Mr Gladwin said he was ‘astounded’ when he spotted the poster by chance as he was walking home.

He said: ‘I was just astounded really. We live in the 21st century and they have put that message — that non-Christians will burn in hell — up to try and scare people into joining their mentality.’

The strongly-worded sign — which was put up next to a notice board which promises that visitors ‘can always be sure of a very warm welcome’ — was taken down by Pastor John Rose, 69, after police launched an investigation into the complaint.

The PC police act like they have tons of time on their hands to bully a church about a sign while people suffer at the hands of real crime. According to UK Crime Stats, Norfolk Constabulary,[3] there’s still plenty of crime occurring monthly to keep cops busy actually helping people instead of bullying people.

Also,
Government News In Iran: Men Have The Right To Rape Any Unveiled Woman