Embrace multiculturalism in the other line, infide[1]l: 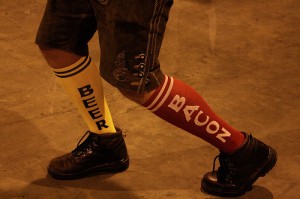 They weren’t too pleased with the softball team uniforms, either.

Marks & Spencer has told Muslim staff they can refuse to serve shoppers buying alcohol or pork, it has been revealed.

The chain has granted checkout workers in more than 700 stores permission to politely decline to serve customers for religious reasons.

Instead, shoppers are being asked to wait to pay for certain items at a different till.

The policy highlights a divide among the mainstream food retailers over whether religious staff should be excused from certain tasks.

In contrast to M&S, Sainsbury’s has told Muslim staff that there is no reason why they cannot handle goods such as alcohol and pork — even if they are not allowed to eat or drink the products.

A spokesman said the retailer’s official guidelines — which see everyone treated ‘fairly’ — were written following consultations with religious groups,: according to The Sunday Telegraph.

However, Morrisons — which is based in Bradford, where there is a large Muslim population — said it had a long-standing commitment to ‘respecting and working around’ workers’ wishes not to handle certain products for religious or cultural reasons.

I’m pretty sure I’d be shopping at another grocery store the first time someone told me to get in another line because I’m buying bacon.