Last month I discussed a school in the UK who had a written plan to infiltrate state schools for Islam called ‘Operation Trojan Horse’[1]. One of those schools is at it again encouraging students to speak positively about terrorist events.[2] 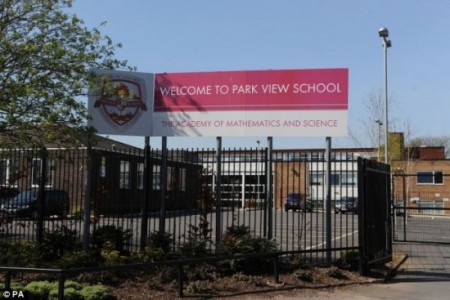 A Birmingham school at the heart of an alleged Islamist plot to take over state institutions allowed students to express ‘positive views’ about terrorism, it has been claimed.

Park View School in Alum Rock, which is under investigation over the ‘Trojan Horse’ plot, allegedly failed to challenge children’s opinions about the 7/7 and 9/11 atrocities due to ‘cultural sensitivity’.

It also reportedly advised staff not to bring soldiers into the school for visits, while one employee allegedly spoke of wanting an ‘Islamic state’, according to the British Humanist Association.

The allegations were made by ‘several’ of the maths and science academy’s former employees, who have only recently chosen to make them public, said the Association.

This Trojan Horse plan is not only in the UK but many of these beliefs to defend Islam (including the more radical sides of Islam) is in American schools and administration. Parents and citizens need to get their heads out of the sand and make sure they know what is being taught in their local schools… it is your duty.