Things like this are why I call the the Isle of Churchill “The Late, Great Britain.” : They’ve lost everything Churchill won for them. : Case in point:[1] 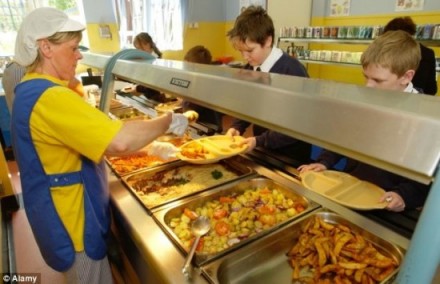 Parents have condemned a school’s decision to ban all pork products from the menu and replace other meats with halal versions.

Pupils aged between three and 11 at Brinsworth Manor Infant and Junior Schools in Rotherham — which Ofsted identifies as having only a small number of pupils from minority ethnic groups — will no longer be able to enjoy sausages, bacon or ham.

Parents at both schools, which share a site, were told of the decision in a letter from Rotherham Council’s principal catering officer Ron Parry, who wrote that there had been ‘minor adjustments’ to the lunch menu.

The move comes as Britain’s vet John Blackwell called for Muslims and Jews to use more ‘acceptable’ methods of killing.

And parents have branded the decision ‘a scandal’ as only twenty per cent of the 600 pupils are Muslim and the decision to provide halal meat was up to individual schools in the town.

A mother with an 11-year-old girl at the school, who asked not to be named for fear of being branded racist, said: ‘At home I pay more for organic and free range food. I am a Christian but I don’t do it because of that, it’s more for the respect of how animals are killed.

‘The way the animals are slaughtered for halal meat is a religious killing and I don’t feel it should be in schools.

‘My daughter has been anxious about the change as she has concerns about if it is humane killing. I believe in animal welfare rights and standards of meat production that halal does not follow.

‘I feel as strongly against eating meat that had been blessed in the name of a god I don’t believe in and the animal killed in a way I do not agree with, as Muslims do against eating non-halal meat.’

And what do they ask the Muslims to give up?