You can see the rise of crime in inner cities that have stricter laws that go against Constitutional freedoms and restrict the liberties of good people. Americans do not like being caged or cornered. An Archbishop speaks out in Philly saying this unrest may turn to something more serious as government continues to violate civil rights[1]. 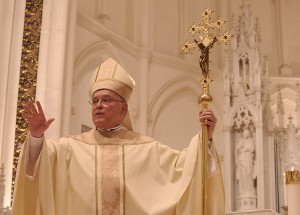 Philadelphia Archbishop Charles Chaput warned that religious freedom in the US is at risk. He also told CNSNews that as the government mandates evil actions, civil disobedience becomes likely.

Archbishop Charles Chaput made similar statements[3] in October on the politics of abortion.

If the election affirms the Obama administration’s HHS mandate, there is a 100 percent chance that there will be civil disobedience in the Catholic Church, led by its bishops. Whether jail will follow is anyone’s guess.

Calling the Obama administration “the most tone deaf to religious liberty issues in recent memory,” Philadelphia Archbishop Charles Chaput warned that religious freedom in the U.S. is “at risk,” and that “the more government mandates evil action, the more likely civil disobedience becomes.”

Last February, Chaput urged his fellow prelates to take the “right action…whatever the cost” regarding the Health and Human Services’ contraceptive mandate, which requires nearly all insurance plans under the Affordable Care Act to pay for sterilization, contraceptives, and abortion-inducing drugs.

Due to “an unfriendly political class” and believers’ own apathy, Chaput told CNSNews.com, “government pressure on religious communities has clearly increased.” Which is why, he says, that religious freedom must not be taken for granted, but be “vigorously defended” in the nation’s courts and state houses.

Civil rights or personal liberties are easily violated by government against a people who do not know what their rights really are. 5 years ago my dad and I started ordering boxes of pocket Constitutions to hand out to people throughout our day. Despite having been “educated” in honors classes in the public school system, I had not read the Constitution until this decade. I learned how I had mistakenly allowed myself to be governed under laws that were in direct violation of my Bill of Rights. Help save America by reading the Bill of Rights in the Constitution, then educate your neighbor by ordering a box of pocket Constitutions and hand them out at the grocery store.[5] Samuel Adams said, “If Virtue & Knowledge are diffused among the People, they will never be enslav’d. This will be their great Security.”