Caught on Video: Two Maine Council Members Refuse to Stand and Recite the Pledge of Allegiance

These two sound like a couple of military grade knuckleheads:[1] 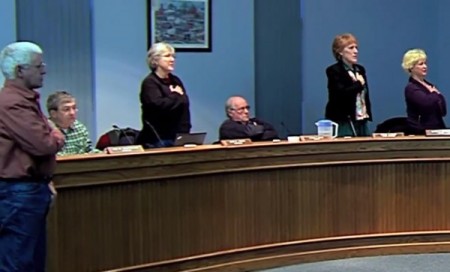 While the furor grows, one the men embroiled in it told TheBlaze on Thursday why he’s been opting out of the pledge since reciting it: became council policy in January[3].

Thomas Brann, a Vietnam veteran who’s not registered with any political party and has been serving on the town council for the better part of 14 years, told TheBlaze he disagreed with Mayor Carol Duprey’s spoken introduction of the pledge, which she said was to pay tribute to those in uniform “currently serving in harm’s way.”

For Brann, “every single person supporting the Constitution” deserves honor and respect, not just those in combat – and it’s wrong for Duprey to leave others out.

Brann told TheBlaze he would stand for the pledge if Duprey’s “in harm’s way” qualifier was struck from her introduction: “For me that would be enough.”

Duprey told TheBlaze Thursday evening that at the Feb. 18 council meeting, which she didn’t attend, there was no introduction to the pledge or tribute regarding troops – just an announcement that the pledge would commence – and that neither Brann nor Shakespeare stood for the pledge.

Video of the: Feb. 18: meeting reflects Duprey’s assertion, which she said invalidates Brann’s insistence that he’d stand for the pledge if she didn’t give her tribute for the troops.

I know you’re going to find this hard to believe, but they both guys tend to lean left:

Brann told TheBlaze that the council’s vigorously debated decision to start meetings with the pledge is part of a larger “Tea Party, extreme conservative Republican” push to take over town politics and “embarrass” and “discredit” him and Shakespeare.

Because they knew how you’d react to saying the pledge, or something.

Here’s video of the two skipping the pledge: