How unsurprising to learn that a California Democrat Politician who wants to deny Second Amendment rights to CA citizens has taken to dealing guns illegally to criminals to fundraise for his campaign.[1] 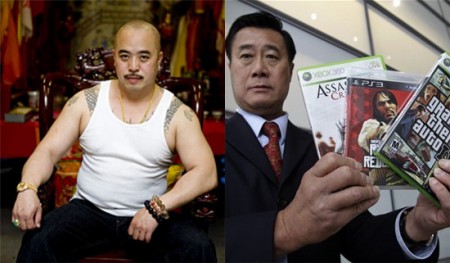 Leland Yee, the Democratic California state senator arrested Wednesday on federal corruption charges, plotted to obtain illegal guns for a Chinatown gangster less than a year after pushing wide-ranging bills to require micro-stamping, restrict magazine choice, and regulate private handling of legally owned weapons, according to an affidavit in support of his arrest.

If you only read one 137-page affidavit of support of a complaint this week, make it FBI Special Agent Emmanuel V. Pascua’s riveting journey into the heart of a truly astounding conspiracy involving Yee, San Francisco political consultant Keith Jackson, alleged Chee Kung Tong Dragonhead Raymond “Shrimp Boy” Chow, dozens of other alleged conspirators, and so many “UCE” undercover agents that the story ends up sounding like a Man Who Was Thursday-style parable set in a universe in which every character is really an undercover agent. It’s interesting to this reporter to learn that Yee is something beyond the dullard he always seemed to be, but the narrative will prove gripping even for first-time Lelanders.

Pascua argues that Yee – who earned rightful hatred from supporters of the right of self-defense with his tireless work to restrict gun ownership in the Golden State – was eager to help convicted felon Chow in an illegal gun deal:
In a further attempt of KEITH JACKSON and SENATOR YEE to gain more money from UCE 4599, in August 2013, KEITH JACKSON told UCE 4599 that SENATOR YEE, had a contact who deals in arms trafficking. This purported arms dealer was later identified. JACKSON requested UCE 4599 to provide a campaign donation on behalf of SENATOR YEE, for SENATOR YEE to facilitate a meeting with the arms dealer with the intent of UCE 4599 to purportedly purchase a large number of weapons to be imported through the Port of Newark, New Jersey.

Yee is accused of multiple felonies including Wire Fraud of Honest Services as well as Conspiracy to Deal Firearms Without a License and to Illegally Import Firearms. At one point in Pascua’s narrative, Yee offers to travel to the Philippines, apparently to help secure a weapons deal with the Moro Islamic Liberation Front. In all, Yee allegedly received more than $42,000 in cash and campaign donations from the FBI’s undercover agents, in exchange for services.

Yee is out on $500,000 bail. His state senate term ends this year. Democratic State Senate Pro Tem Darrell Steinberg has called for Yee to resign.

My father once told me those who desire to make laws for other people are more often the type who would break such laws as their fear from their own personal character reflects in those laws. State Senator Lee totally proved my Dad right!