In case you had any doubts that the:  mission of many schools is indoctrination, not education, get this: “social justice” propaganda is now seeping into math class.[1] 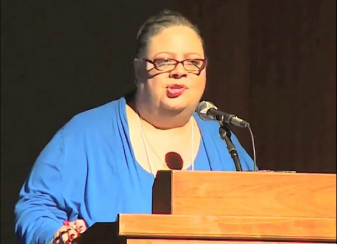 Karen Lewis, president of the Chicago Teachers Union, explicitly stated that the math curriculum should be politicized and recruit children for “community organizing.”

Appearing in early March at the Network for Public Education conference in Texas, Lewis gushed on the practices of left-wing activist teacher Bob Peterson, who also serves as the president of the Milwaukee teachers union.

“People always talk about how that there’s no politics and values in math. That you can teach math and there’s no place for social justice. So let me tell you how Bob deals with that,” Lewis said. “Bob Peterson tells them about José working in a factory making piecemeal clothes. He uses the same numbers and gets the same answer. And yes, math is political, too.”

EAGnews has previously reported about the social justice math activists’ tricks in a book called “Rethinking Mathematics: Teaching Social Justice by the Numbers,” edited by Peterson.

You know, if American children’s math and science scores weren’t downright:  dismal compared to those of other developed countries, we might have time for this nonsense. But the unions are willing to let kids slip further behind while teachers use class time to preach their pet theories about race, gender, and class oppression.