We all know that colleges these days are sex-obsessed to a preposterous degree. It’s bad enough when unwilling students are subjected to relentless vulgarity–one could argue that if they don’t like the campus climate, they should attend school elsewhere. But is it really acceptable for some idiot in a giant penis costume to accost schoolchildren visiting a public school campus?[1] 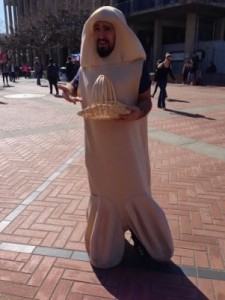 [2]
Campus Reform reports on an incident at UC-Berkeley:

A group of elementary and middle school students touring University of California — Berkeley last week were exposed to a man in a giant penis costume and school-sponsored sex games.

The children were led through the campus quad while Berkeley students were playing “pin-the-tail on the anus” and tossing condoms through holes on a poster board meant to represent vaginas and anuses.

There was also a man dressed as a giant penis handing out condoms, although he was not permitted to hand them to the children.

“We had little lines of children walking down Sproul [Plaza] next to all the demonstrations, the guy in the penis suit, everything,” Berkeley student Claire Chiara: said in an interview: with: The College Fix.

I would make a comment about “lost innocence,” but honestly, the kids in this story are probably more mature than the students running around in penis costumes. Scary.

Also see: The 25 Stupidest Liberal Quotes of the Last Decade[3]