Chris Christie bullying tactics come back to haunt him: Uncovered Emails to his Office to GWBridge-gate

I’m not going to shed a tear over RINO Chris Christie.:  However this scandal shakes out, Christie’s temperament as a possible president of the United States is in question.:  The bully gets his payback! 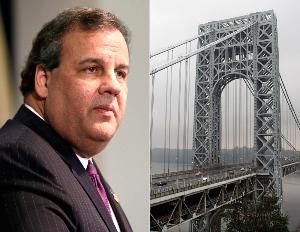 [1]The Record / Herald News [2]reports Breaking a day of silence as the George Washington Bridge controversy mushroomed, Governor Christie issued a terse, four sentence statement late Wednesday in which he claimed to have no knowledge that his deputy chief of staff and two of his top executives at the Port Authority were involved in a vindictive effort to create “traffic problems in Fort Lee” by shutting lanes leading to the world’s busiest bridge. –

Electronic messages between the three Christie loyalists are replete with references and insults to Fort Lee[3]’s mayor – who had failed to endorse Christie for re-election – and they chronicle how he tried to reach Port Authority officials in a vain effort to eliminate the paralyzing gridlock that overwhelmed his town of 35,000, which sits in the shadow of the bridge.

Governor Chris Christie on Wednesday issued the following statement: “What I’ve seen today for the first time is unacceptable. I am outraged and deeply saddened to learn that not only was I misled by a member of my staff, but this completely inappropriate and unsanctioned conduct was made without my knowledge. One thing is clear: this type of behavior is unacceptable and I will not tolerate it because the people of New Jersey deserve better. This behavior is not representative of me or my Administration in any way, and people will be held responsible for their actions.”

Read emails between Christie administration and Port Authority executives: View[4] / Download[5]:
The documents obtained by The Record raise serious doubts about months of claims by the Christie administration that the September closures of local access lanes to the George Washington Bridge were part of a traffic study initiated solely by the Port Authority. Instead, they show that one of the governor’s top aides was deeply involved in the decision to choke off the borough’s access to the bridge, and they provide the strongest indication yet that it was part of a politically-motivated vendetta–a notion that Christie has publicly denied.