The numbers aren’t certain, but it looks like at least 90% of gun owners in New York State are ignoring the April 15 deadline to register under the state’s SAFE Act — and law enforcement officials are standing with them[1]: 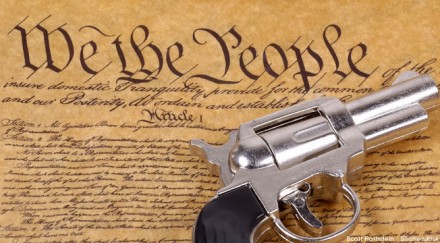 While gun registration may be exceedingly popular south of the Tappan Zee Bridge[2], and in a few pockets upstate, many (if not most) law enforcement officers and gun owners in the state have publicly rebelled against the law. Many municipal and county governments have joined them in open defiance.: Gun owners in New York are well aware of the fact that their county sheriffs, state police, and local officers don’t intend to enforce the law, a stance that many law enforcement leaders have announced publicly.

Knowing that the chief law enforcement officers in most counties have announced that they will not enforce the law, a non-compliance rate exceeding 95% and perhaps exceeding 98% does indeed seem plausible.

“The rank and file troopers don’t want anything to do with it,” Assemblyman Bill Nojay (R-Pittsford) said Monday. “I don’t know of a single sheriff upstate who is going to enforce it.”

Andrew Cuomo has demonstrated that he has the political power to ram through unconstitutional laws in Albany. What he’s also unwittingly exposed is his complete inability to enforce them.

Most Americans, regardless of their political persuasions, believe in civil disobedience for the right cause. It looks like hundreds of thousands of gun owners, as well as Constitution-abiding law enforcement officials, have decided that “enough is enough” when it comes to letting their Second Amendment rights disappear.

Seven Differences Between Winners And Losers[4]