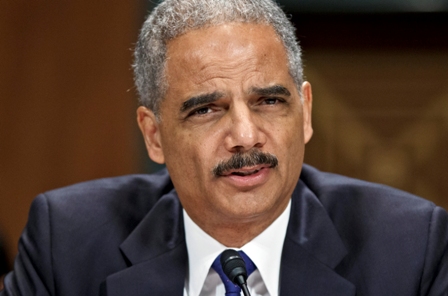 The articles list numerous illegal acts committed by Holder, who is already the first Attorney General to be held in contempt of Congress.

“There’s a total disregard for the rule of law,” Rep. Paul A. Gosar, Arizona Republican, told The Washington Times. : “We can’t sit idly by here as we see the Constitution and justice being defamed right and left at the whim of the attorney general.”

Gosar presents a laundry list of Holder’s illegal actions, including advising Obama to ignore the law Obama himself signed which requires the president to notify Congress 30 days prior to the release of GITMO detainees…Holder testifying under oath that he was ignorant of the Obama Department of Justice spying on FOX News reporter James Rosen, a clear violation of the First Amendment, was another reason given by Rep. Gosar. Later it was learned, in fact, that Holder authorized the spying on Rosen.

That’s only the tip of the iceberg. What about Holder’s refusal to prosecute anyone involved with the IRS harassment of Tea Party groups and other Obama opponents? What about his failure to enforce federal law on the border? That alone should be enough to remove this unscrupulous Attorney General from office.