No, this is not some “bring me the head of Alfredo Garcia” or Shakespearean “off with his head” call to action. Though I believe a Vlad the impaler type demonstration in Washington DC might have some kind of effect, conservatives are not so vicious as that. It’s a statement from conservatives that Boehner has been in his role as speaker long enough. This is a collective effort of all conservatives everywhere calling for Mr. Boehner to be removed from the chambers top post.[1] 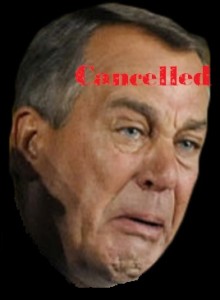 The Senate Conservatives Fund says that it is time for House Speaker John Boehner to go and they will keep track of the GOP lawmakers that support their effort to oust him from his leadership : post. The group, which is targeting several incumbent Republicans in primary races this year, said Mr. Boehner, Ohio Republican, has sold out small government : principles on too many occasions and the last straw came this week when House GOP leaders signaled they were going to support a bill to increase the nation’s borrowing limit without attaching any strings to reduce spending.

“There’s only one solution. John Boehner must be replaced as Speaker of the House,” said Matt Hoskins, group’s executive director.

“Conservatives helped Republicans win a majority in the House of Representatives, which made it possible for John Boehner to become speaker. Unfortunately, he has chosen to ignore us and help President Obama enact his liberal agenda.”

Mr. Hoskins said Republicans should block him from the position at the beginning of the next Congress. Mr. Boehner said Tuesday that he is preparing to move forward on the first no-strings-attached debt increase of his tenure as speaker. The announcement came after Mr. Boehner and his leadership team tried – and failed – to get rank-and-file Republicans to sign off a deal that would increase the nation debt limit and restore future cuts in the cost-of-living adjustments on military retirement pay that were included in the December budget deal. The Senate Conservatives Fund, which is dedicated to electing “true conservative leaders” and was founded by former South Carolina Sen. Jim DeMint, is now urging its supporters to sign a “Replace the Speaker” petition.

“Republicans must know that conservatives expect them to make a change at the top, and we’re not going to give up on this until John Boehner is gone,” Mr. Hoskins said. “It’s sad that it has come to this, but enough is enough. We will never stop the massive spending and debt that are destroying our country if the Republican speaker of the House surrenders to the Democrats and stabs conservatives in the back.”

SCF joins For American, Tea Party Patriots and Freedomworks in calling for Mr. Boehner to be removed from the chamber’s top post.

To be honest I believe that conservatives have allowed too much of this summer soldier garbage in DC to go on too long. If conservatives expect to preserve any bit of the sovereignty of this Nation, they must bypass waiting for election time to come around again and leave writing one letter to Congress to granny. Conservatives must make a personal commitment to get on the phone and harass their representative on a weekly basis like a jewish mother because sitting around waiting for the next election and giving up an individuals responsibility of being actively involved has been the ruination of America.