It’s President Obama who refuses to lead unlike any president in U.S. history.:  He only like to act like he’s an outsider when in fact the buck stops with him! 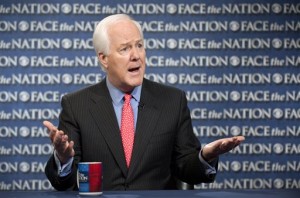 “My hope would be the president will reconsider his [decision] to sit on the sidelines” and negotiate a deal with GOP leaders, Cornyn said during an interview on CBS’s “Face The Nation.”

“So far [Obama] has been AWOL,” the Texas Republican said.