Finally, some good news! The 9th Circuit Court of Appeals struck down California’s concealed-weapons requirements[1], saying they were too strict to be Constitutional. 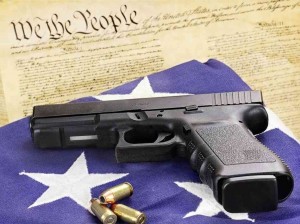 California requires concealed-carry applicants to show “good cause” for wanting a permit beyond self-defense…whatever that means.

The 2-1 ruling of a three-judge panel of the 9th U.S. Circuit Court of Appeals said California counties were wrong to require law-abiding applicants to show “good cause” beyond self-defense to receive a concealed-weapons permit.

California prohibits people from carrying handguns in public without a concealed-weapons permit. State law requires applicants to show good moral character, have good cause and take a training course. It’s generally up to the state’s sheriffs and police chiefs to issue the permits, and the vast majority require an applicant to demonstrate a real danger or other reasons beyond simple self-defense to receive a permit. The 9th Circuit on Thursday said that requirement violates the 2nd Amendment.

Let’s hope this discourages other cities from trying to find ways around the Constitution in order to ban guns.