COVERUP: Top US Intelligence Official Lied to Congress About His Involvement With the Muslim Brotherhood; Shielded From Public By the Top Inspector General

Newly declassified documents obtained by the Clarion Project show that the National Intelligence Director, James Clapper, purposefully lied to Congress about his involvement with the Muslim Brotherhood.[1] 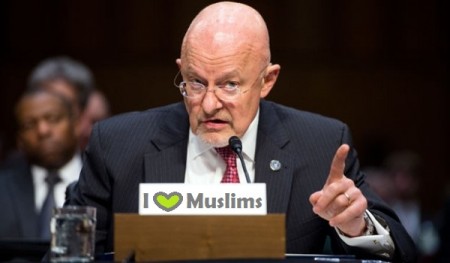 The story of the deception began when the Director of National Intelligence James Clapper testified to Congress on February 10, 2011 saying that the Muslim Brotherhood is “a very heterogeneous group, largely secular, which has eschewed violence and has described Al-Qaeda as a perversion of Islam.”

In the same hearing, Clapper was asked by Rep. Jeff Miller (R-FL) about the administration’s relationship with the Muslim Brotherhood. He answered, “There have been outreaches to the Muslim community in general, but I guess we’re not aware of any direct outreach to these particular organizations. That is, if you’re speaking domestically.”
FBI Director Mueller then chimed in, saying there is “no relationship with the Brotherhood. Period.” The CIA Director Leon Panetta then agreed, dismissively laughing in the process.

One month later, on July 11, 2012, the Inspector-General denied the congresspersons’ request, citing Clapper’s earlier statement that there was no relationship with domestic organizations linked to the Muslim Brotherhood. He said, “These statements remain accurate.”

The members of Congress — and the American people — have a right to know the truth: The Office of the Director of National Intelligence does have a relationship with domestic organizations linked to the Muslim Brotherhood — and, it is a truth that needs a formal evaluation and investigation.

The people gathering intelligence for US is lying to US. So what does that mean to you?

Also,
Muslim Imam in Tennessee PREACHES “Jews & Christians are Filthy, Their Lives & Property can be Taken in Jihad by Muslims” in America[3]