He wanted to die. He got what he wanted. I don’t believe what happened after that was what he was expecting though. More fire and brimstone than wall to wall virgins. 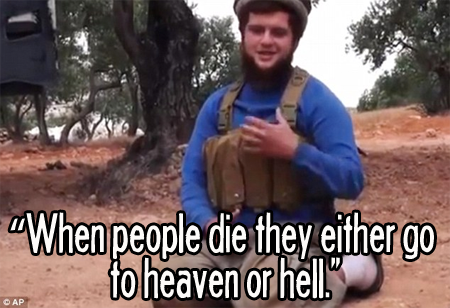 In footage released by an al-Qaeda-linked group fighting in Syria,: college dropout Moner Mohammad Abu-Salha, smiles while talking about wanting to die and is also shown making his bomb before strapping it on.

This is the second video to feature the American jihadi, and it contains a haunting soundtrack of Arabic music set against the images and words of a man hell-bent on dying for the cause.

‘I want to rest in the afterlife, in heaven,’ Abu-Slaha says. ‘There is nothing here, my heart is not resting here in this life.’

The Nusra Front, which released the video, claimed two of the other three suicide attackers in the assault in the government-held northwestern city of Idlib were from foreign countries, including one from the Maldives.

‘Glorious is God, and thanks God, his is a grace from him,’ Abu-Salha continues. ‘When I came to Syria, I had nothing.

‘I had no money to buy a gun and ammunition, now God granted me all of that and much more.’

The grinning geurilla is then shown making the bomb believed to have been in the truck Abu-Salha:  and others drove as they stormed their target.

‘Heaven is better,’ he said in a previously-released video. ‘When people die they either go to heaven or hell. There is happiness beyond explanation.’

Not where you went, there isn’t.

You can, if so inclined, watch the chilling video here.[2]