Cruz defends self on ObamaCare fight, against GOP establishment

GOP establishment Republicans and some conservative journalists like Jennifer Rubin of the Washington Post continue to gripe by saying:  had not the Shutdown occurred the media would have:  16 more days to focus on the troubled ObamaCare rollout.: :

What world are these idiots living in?

The media would have ignored the rollout the same way they ignored Benghazi.:  But, precisely because of the shutdown and the reasons why Ted Cruz and others wanted to defund, delay or whatever ObamaCare gove the rollout the context for the American people to understand.:  It was a brilliant strategy and Ted Cruz deserves a lot of credit. :

InfoWars[1] repots Texas Republican Sen. Ted Cruz is charging ahead with his argument that attempts to dismantle ObamaCare needed to be part of the recent Washington budget negotiations and is firing back at the GOP establishment and others who say his tactics led to an unnecessary, partial government 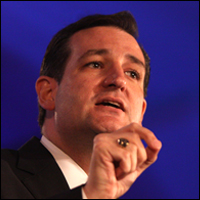 Cruz, who appears poised for a president bid, told hundreds at a GOP fundraiser in Iowa on Friday that efforts he led to “defund” ObamaCare will carry the fight through the 2014 congressional and 2016 White House races.

“One of the things we accomplished in the fight over ObamaCare is we elevated the national debate over what a disaster, what a train wreck, how much ObamaCare is hurting millions of Americans across this country,” Cruz said at the Iowa GOP’s annual fundraising dinner in Des Moines. “Senate Republicans didn’t stand together. Had we stuck together, the outcome might be very different. The House does now, but I’m confident that the U.S. senate will in time listen to the American people.”