Cruz: Holder Should be Impeached if No Action on IRS Scandal 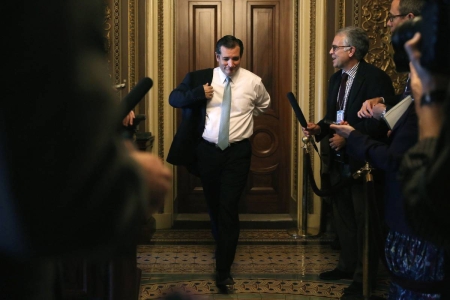 On Thursday, the House Oversight Committee held former IRS agent Lois Lerner in contempt of Congress[2], only one day after the House Ways & Means Committee sent a letter to Attorney General Eric Holder asking him to prosecute Lerner. On Thursday night, Cruz told[3] Sean Hannity that Holder should be impeached if the Department of Justice refuses to act:

Cruz said Holder’s actions were not in keeping with the policies of the Justice Department, which has “a bipartisan tradition of resisting partisan pressure and upholding the rule of law.”

He cited examples of previous attorneys general, such as Janet Reno and Elliot Richardson, as models for how the department should be run.

Cruz described Holder as “the most partisan attorney general the country has ever had,” Breitbart reported.

Cruz also said he was “very pleased” that Lerner was held in contempt[4] by the House Oversight Committee, but criticized the Obama administration for not moving to indict one person eight months after the inspector general concluded that the IRS had wrongfully targeted conservative groups for heightened scrutiny.

Cruz also took aim at President Barack Obama for appointing a Democrat, who was a fundraiser for his presidential campaign, to lead the IRS investigation…

Actually, Holder should have been impeached over Fast & Furious, as well as for telling state Attorneys General to ignore state laws on marriage[5]. But given Congress’ proclivity for cowardice when it comes to standing against the Executive Branch, one can only hope that a lack of action against Lerner would be the proverbial final straw for many Members who would rather abase themselves than follow Cruz’s lead.