The Communist mayor of New York doesn’t care what’s written in the New York State Constitution.:  He won’t sit idly by and accept that he doesn’t have the authority to tax affluent New Yorkers for his scam of a Pre K program that in reality is a payoff to the Teachers Union.:

: I predict he’ll be just as lawless as the president of the United States and act like other progressives bullies across the country.:

Don’t be surprised if bus loads of screaming SEIU union members are dispatched to Dean Skelos personal residence in Rockville Centre in an effort to intimidate him with picket lines outside his front door.:  This is what progressives do when they want their way and its’ the kind of community organizing tactics Barack Obama taught.: 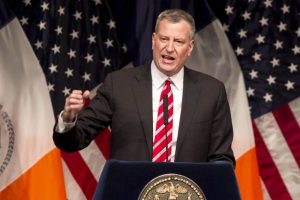 “The gauntlet’s been thrown down in Albany,” he told a cheering crowd of clergy at a Bedford-Stuyvesant breakfast. “We will respond.”

Skelos, from Rockville Centre, has said he wouldn’t permit a vote on de Blasio’s plan, which requires state legislative approval.

An angry de Blasio called on the 200 clergy members — including the Rev. Al Sharpton — to appeal to their congregations in a four-week lobbying effort to be launched Sunday.
New York City shouldn’t be “treated like a colony that doesn’t even get to decide its own future,” the mayor said.

The city requires the state legislature’s permission for an income tax hike on those making more than $500,000, with revenue to go toward de Blasio’s plan for universal pre-K and after-school programs.

Skelos had told reporters Monday, “The constitution of the state has specifically given the legislature oversight of these types of [tax] issues and we have seen in the past when New York [City] went under with bad management.”