It’s always fun to sit in your office chair on a Monday contemplating the truckload of work ahead and read an article about how: a portion of your paycheck (the part the government steals) is: being used to pay welfare recipients and fund their drug habits. Even more fun to see that the dealer behind it has some Charlie and the Chocolate Factory name like Luvinia. That’s right Luvinia Smith was caught driving around with a half pound of pot and welfare recipients cards in her car last week.[1] 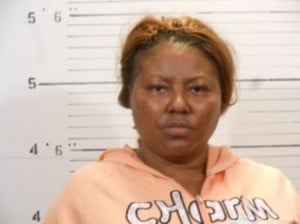 A local government official was busted for drug procession last week and police say she had five EBT cards with her. Those cards were sent to the Department of Agriculture as a part of a federal investigation into possible food stamp fraud.

Possible? Is there any way that having five EBT cards isn’t fraud?

The Deputy Clerk for Alorton, Luvina Smith, was arrested a week ago in Brooklyn, charged with marijuana possession, after police say they found a quarter pound of pot in the car she was driving. Police also took five government EBT cards from her.

Brooklyn Chief Tony Tomlinson, and other sources, tell News 4 that EBT cards are sometimes traded for as little as half their value as a down payment on illegal drugs.

“In a lot of cases that we’ve seen the person who receives the benefits will relinquish their card and that pin number, and that gives the dealer the opportunity to call and make sure there’s money on it and they’ll just hang on to the card until the benefit comes through and then receive whatever the dealer may be dealing,” said Chief Tomlinson.

The Brooklyn we’re talking about here is in Missouri.

Chief Tomlinson said the illegal trade seems to involve a very small percentage of cardholders. The crimes often run in small circles of acquaintances, even relatives that may go back generations.

Chief Tomlinson has his photo on all his credit cards. If the government put cardholder’s photos on EBT cards, he’s convinced it would reduce fraud in a program that costs taxpayers $80 billion a year.

Yes, but then how would the food stamp program continue ballooning year after year?

When it comes to crime, Smith, a convicted felon, learned from one of Alorton’s legendary criminals; her own mother, longtime mayor Callie Mobley, who was prosecuted for stealing from the village. She eventually served two years in prison for income tax evasion.

How can you blame a person who was taught by her mother to steal from strangers through abusing government subsidies? You cannot change a system that is designed to enslave people and take away their morality and personal responsibility; perhaps one day soon Obama will run this country into the ground enough that welfare subsidies will dry up.