Frederich Bastiat referred to the forced redistribution of wealth as “legalized plunder.” : It’s legal theft, which is what makes this claim so laughable:[1] 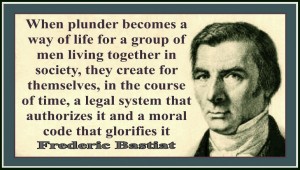 Elected Democrats and movement progressives are up in arms over the meager cuts to the Supplemental Nutrition Assistance Program (SNAP – commonly known as food stamps). Hot Air’s Erika Johnsen: covered[3]: the non-drama over the farm bill yesterday and noted the very meager reforms included in the legislation, but some Democrats are bemoaning the $800 million in yearly cuts to SNAP in apocalyptic terms. The overall SNAP program costs $70 billion per year.

Hipster[4]: congresswoman Rosa DeLauro (D-Conn.): said[5]: “Congress has lost its way” and described the farm bill as “reverse Robin Hood legislation that steals food from the poor.” Rep. Adam Smith (D-Wash.) described the 1% of the food stamp budget being cut as “essential nutritional assistance” in a time when SNAP enrollment and spending is at all-time highs. Jim McGovern said that the legislation “increases hunger.”

The only thing more ironic than Democrats calling a decrease in legalized plunder stealing is that one of the knuckleheads doing it is named Adam Smith.

See also : :Iranian Commander: We Have Targets Within The U.S.: