Despite $17.5 Trillion in Debt, Obama Calls for Giving 33% More to United Nations

More? : We need to stop giving anything and kick the whole lot out of the country:[1]

When U.S. Ambassador to the United Nations Samantha Power testifies before a House Appropriations subcommittee on Wednesday,the panel will consider a budget request for international organizations that is 33 percent bigger than last year’s, including a 43 percent hike in U.S. contributions to peacekeeping missions.

According to Heritage Foundation scholar Brett Schaefer, President Clinton in 1994 signed a law setting a 25 percent cap on U.S. contributions for U.N. peacekeeping, which at the time were running at around 30 percent.

Never mind the fact that we’d be borrowing money to give to the United Nations, burdening our children with these payments, plus interest.

Let’s address the fact that the United Nations is the real world version of the Mos Eisley spaceport: 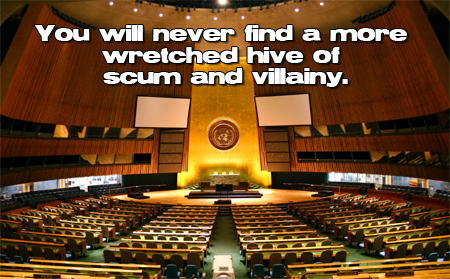 You don’t give them more money. : You give them an eviction notice.