Of course, the deeper and more meaningful issue is, as always, getting more votes from undecided voters. Look at it from their point of view, walking in the shoes of the guy whose job it is to get Barack Obama re-elected. Half the battle is to get the country thinking about recreational sex, at which point, it becomes all about the libertarians. You’ll never get them to vote for democrats, but it’s just as good to get them to vote against Republicans, and that job is done once you start talking about recreational sex; sex for purposes other than making babies. 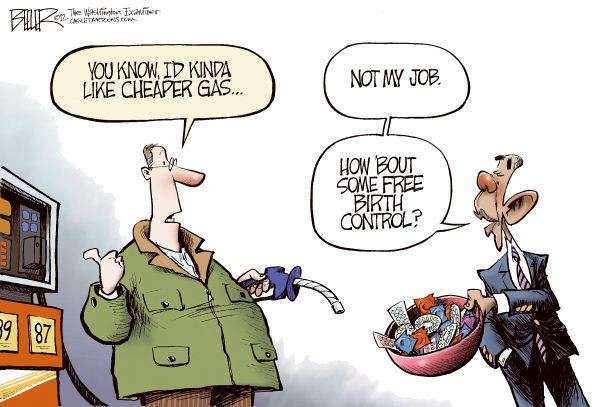 Hey, I’m all in favor of sex for purposes other than making babies. Which is synonymous, for all intents and purposes, with the use of contraceptives.

The trouble with contraceptives is they enable the Idiocracy[1]; only the incompetent reproduce, since it’s possible to screw up the application of a contraceptive device. And that is right in keeping with democrat policies. Here’s a sad sack that can’t, or won’t, make his own life work — we need a government program. The sad sack figuring out what he’s doing wrong, is out of the question, as is the sad sack learning to live with his self-imposed limitations. Put him in back of a conference table with a microphone on it, in front of Congress, and suddenly it’s a moral right. Then hold a vote on it, and now it’s a legal right. The hairpin turn happens when the sad sack drones into the microphone…see what’s happening there? Perfect reversal. Sad sack can’t make something work, so we all need to listen and learn. To the guy who can’t make it work. In fact, the reversal is perfect, since if you can somehow manage to make it work, you have more to learn than most other people. You, above & beyond all the rest, need to shut your mouth and listen to the wisdom of the guy who can’t make it work. It’s your only hope!

That’s my “DJEver Notice” moment. In the conference table setting, the incompetent wield influence denied to the competent. Exactly the same situation exists with birth control. The incompetent reproduce. The competent don’t.

The result is more and more rights; every time a sad sack speaks into a microphone at a conference table it’s another new right. Now that he’s here, that is…to provide all these rights to the lucky sad-sacks that are already here, we’re going to have to define a perimeter within which the rights are provided…so the little bundles of joy that are on the way, have to be defined out of existence. “Got a baby in her tummy” is something you can’t even use in polite, mixed company nowadays, since babies aren’t babies until they breathe actual air, and until then it’s a fetus. Pregnant women used to carry around babies that weren’t born yet. Now, they’re sort of…people-candidates.

This is distasteful to just about everybody, so we’re all obliged to refrain from discussing it — and just leave things the way they are, which is advantageous to the people who made it distasteful. But what if you think on it? It gets eerie, rather quickly. A person isn’t a person until it’s born…the supposition works with things that really, and demonstrably, are not people. It works with a car, can’t expect the engine to roar to life until all the parts are bolted in place. With people? Not so much…but the people in charge say so…so you see what’s happened here. People have been defined to be non-people, and those of us who’ve crossed the threshold are expected not to discuss it too much.

Meanwhile, why is it so important to stop babies from being born, and/or conceived? The plain, cold, hard truth of the matter is: Because children have become liabilities and are no longer assets. A hundred and fifty years ago, if you met a thirty-year-old guy who had six children, you’d think wow what a lucky and blessed guy…what’s he doing right, I wish I could be like that guy. Nowadays you have to think — uh, let’s see…child support payment multiplied by six…yeah, he’d better do whatever it takes to make her happy or he’ll end up living in a cardboard box. I said this is about the longer view, on the progressive side. And that’s it. Babies are liabilities and not assets; babies represent humanity; and that is the goal. Human beings cannot financially afford their own existence.

How else do you get people to rely, pathetically and wretchedly, on government.

I notice, also, that there is something else creeping in very gradually; seems to have started all the way back with FDR’s Four Freedoms[2] speech. This notion that, once we put a conference table and microphone in front of some idiot and figure out hey, we just manufactured a brand new “right” — it seems to be a steadfast position of the democrat party that, if the new right involves an expense, and you have to bear it yourself as opposed to the government taking care of it for you, that’s the equivalent of being denied the right. And of course, since it’s a right, that is eliminated as an option straight out of the chute. So the taxpayers have a new expense.

I believe this presents some opportunity for the conservatives, ironically enough. This is a question on which the democrats provide one answer and everyone else — including moderates and libertarians — provides the opposite one. Conservatives stand with non-conservatives. By and large, it seems democrats believe if you have a right to do something, you have a right to do that thing without personally bearing any expenses associated with it. Like I said[3] over at the Hello Kitty of Blogging —

An exhaustive list of exceptions follows:
1. Running a business that hires people (that isn’t a S&L or a car company).

Yeah, that’s the end of the list, if you had any doubts.

Someone came along and suggested, smoking grass. We cannot recall a specific democrat plan to force the government to buy bags of grass for people who want to smoke it.

Not sure whether to add it to the list or not. If that is done, and the exceptions-list is lengthened to two items followed by an abrupt halt, then the exercise becomes something like painting on oil and canvas an image of a herd of animals, while in real life, the herd gallops along at a full trot. How are you going to meaningfully capture the snapshot, while the object is in motion? And if you toss aside the oil and canvas and go for a camera, what good does this do you? Because the situation we labor to recognize properly, becomes one in which these things are attacked in definable stages. Put the idiot in front of the microphone, manufacture and legislate the new right, then put another idiot in front of another microphone and have the new right paid-for by the taxpayer. The one or two items on the list end up being nothing more than a temporary gap between the two idiot/microphone project milestones. More democrats get elected, so new things are added to the list, and then the democrats get something paid-for — or try to — and something falls off the end of the list.

But I don’t think this is a winning proposition for them. If Republicans can campaign just as well…but that’s a falsehood, since hey, they can’t, but if they could…then the democrats would lose just as many libertarian votes as they would gain. I mean, face facts: If you live in a society where you’re allowed to do everything that doesn’t hurt someone else, the way the libertarians want it, but you also have to pay, via your taxes, for the expenses that are incurred by idiots who also want to do the things they want to do, is that really a libertarian society? Most libertarians would say no. They wouldn’t want to; they’d hem and they’d haw about it, but I think they’d grudgingly concede, no, you’re not fulfilling the proper vision unless people are allowed to do these harmless things and then expected to pay for doing them. Therefore, they’d have to bite the bullet and vote Republican if they want to be taken even a little bit seriously. Not a favorite situation of theirs, to be placed in, but hey. You can’t call yourself a libertarian unless you can choose, rationally, from a range of choices that all suck…none of which tickle your funny bone. It takes a special maturity to be able to do that, and if you aren’t cultivating it, then why call yourself a libertarian?

In the case of the Fluke debacle, the women are in the same situation. You can drone on as much as you want about how it’s “inappropriate” for some guy on the radio to call Sandra Fluke a slut, and peel off with one euphemism after another, but at the end of the day, are you really showing respect to women when your position is that they’re dependent, helpless, weak, lack any kind of resourcefulness, and need the government to buy their contraceptives? Again, if a little disciplined thought is applied to the question, the answer would have to be no. In a society in which sex is just recreational, and nobody reproduces except the incompetent (because nobody can afford to), womanhood loses value. Women devolve from their previous stature, as our sisters and mothers, and guardians of virtue, definers of our culture, to a bunch of screaming, constantly complaining, trouble-making harridans who can’t pay for their own stuff. You can nag at anyone who points out the obvious, and if you cost the radio guy some sponsors and end a career here & there I suppose it’ll work…but not over the long term. Not if, by doing these things, you’re just proving the point.

It has become an essential objective within our society not to reproduce. Those whose role it is to become pregnant and create life, therefore, must lose value within that society.

So libertarians, and women, must vote for Republicans…or at the very least, against democrats…if they wish to be taken seriously.

I want the 2012 election to become a Sandra Fluke election. Not in spite of my desire to see Barack Obama lose His job. But because of it. His party is convinced this is a winning issue. I think they’re wrong.