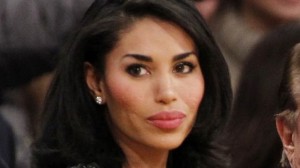 If you thought Hillary Clinton was going to have a free ride into the White House, you’re gonna be very surprised when President V. Stiviano assumes office! If you don’t know her by that name, she’s the girlfriend of embattled Clippers owner Donald Sterling — the very woman he was speaking to when he was recorded saying that he didn’t want black people at his basketball games.

When paparazzi caught up with V. Stiviano, Donald Sterling‘s girlfriend and the woman on the other end of Sterling’s racist rant, Stiviano went on an odd tangent about how one day, she will become a future president. She said, “One day I will become President of the United States of America, and I will change the legislation and laws.” Stiviano kept going on for a bit, bringing up “modern day history [and the] civil rights movement” for some reason.

Call me crazy, but after so many years of Obama and an inept Republican establishment, I think we should give Stiviano a try in 2016. She can’t possibly wreck the country more, can she?